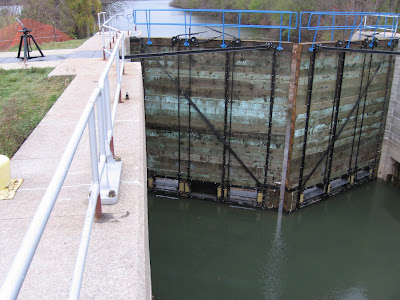 The upper and lower timber gates in place at the outset of the 2007-08 Cedars project were installed in 1974–1975 by the United States Corps of Engineers. Since they are constantly subjected to water, the timbers have an operational life of approximately two to three decades. Maintenance over the last century has included the replacement of the timbers and the cleaning, repair, and replacement, as needed, of the metal components. In its maintenance efforts the COE replaced the historic gates in-kind repeatedly, and the two sets of paired wooden gates in place at the beginning of the current project were fairly close replicas of the gates that had been installed in the late 19th century. Restoration was the approach determined appropriate to the timber gates, however the replacement of the timbers, a long-held tradition associated with the maintenance of the locks, was necessary.

C. R. Meyer secured Douglas fir from the (wood comparable to what had been used by the COE in the 1974–1975 rebuilding of the gates) for the replacement timbers. The wood was grade no. 2 or better and treated to .60 Alkaline Copper Quaternary (ACQ), which was selected as an environmentally friendly wood preservative. In cutting and milling timbers for the replacement gates, the necessary openings and curved ends of each beam, where the wood interfaces with the stone, were cut at the mill to expedite assembly and installation at the site.

Posted by Cornerstone Preservation at 7:08 PM