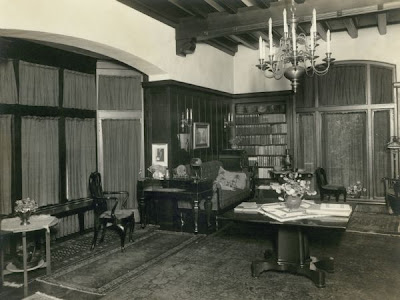 The Olin House has functioned as the official residence of the chancellor of the since 1925. It was designed fifteen years earlier as a private residence for John Olin, a prominent attorney and member of the university law faculty.

In addition to having been engaged in a busy professional life practicing and teaching law, Olin’s principal avocation was the Madison Park and Pleasure Drive Association (MPPDA). Olin founded the organization in 1894 and served as its president until 1909. In this role he promoted park development in ; by 1909 the MPPDA had acquired approximately 265 acres of park land (much of it waterfront property), and the city had established a park commission. Olin’s wife, Helen Remington Olin also was dedicated to social concerns and was well known for her work with the Wisconsin Woman’s Suffrage Association and for her advocacy of a meaningful co-education curriculum at the .

John and Helen Olin selected Ferry & Clas of to design the house; at nearly the same time as securing the commission for Olin’s residence, Ferry & Clas were at work designing the Brittingham Boathouse in what had been a blighted waterfront area in . Olin had the experience of working with the architects on the boathouse project as the president of the MPPDA.

The Olin House has been recognized as a contributing element within the University Heights Historic District, which was listed on the National Register of Historic Places in 1982. The district is an important resource for representing early suburban development in , for the prominent individuals that chose to build there and for the fact that the district contains a residence designed by Louis Sullivan and another by Frank Lloyd Wright, located within blocks of one another. The Olin House is extremely well-built, well-designed and prominent within this important neighborhood. Its site, which is many times the size of most neighboring lots, further distinguishes the Olin House. For its development, Olin secured the services of the nation’s most pre-eminent landscape architects to design a park-like setting for the residence.

English Tudor Revival references from the exterior are reintroduced in the scale, finish and detailing of the first floor living room, which the Olins furnished with some Arts and Crafts pieces. The large living room is thirty-two by seventeen feet, exclusive of its two alcoves; the ceilings are at thirteen feet and the walls are wainscoted with quarter sawn white oak to a height of 8½ feet. The oak woodwork was stained a dark shade, making it similar in color to the walnut trim in the dining room. The floor is constructed of eight-inch quarter sawn white oak veneer, approximately an 1/8th inch thick, edged with thin strips of black walnut. Screws used to secure the boards were counter sunk and a small piece of wood used to conceal the screw. The oak boards were fastened together with glue to prevent shrinking. Boards that are broader than those used for flooring elsewhere in the residence were purposefully selected to be in “keeping with the size or dimensions of the room.” The space was illuminated with a large and ornate chandelier that was centrally placed and sconces were situated on walls throughout the space, including on either side of the fireplace.

Posted by Cornerstone Preservation at 1:10 PM