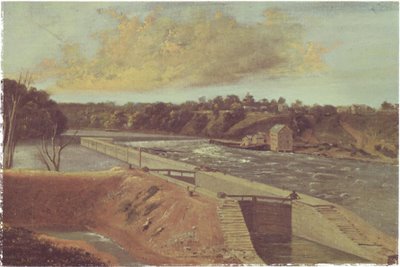 In 1866 with control of the Lower Fox River transferred to the Green Bay and Mississippi Canal Company, the federal government sent Major Charles Sutter to survey the canal system and make recommendations for its improvement. Major Sutter reported on the fully completed canal, two dams and four locks in the Grand Chute area (now Appleton), offering that the lower dam was water-tight and in good condition, but that some settling and seepage was taking place at the upper dam. He described the first three locks as positioned along a 3,600 foot canal bypassing the upper dam. According to Major Sutter all three locks required new planking and gates; the fourth lock, on a separate 1,267 foot canal bypassing the lower dam, was observed as being in good condition although replacement gates were recommended.

Four years later, the United States government took over the Lower Fox waterway, including the Grand Chute locks, and in 1872 the system were placed in the care of Major D.C. Houston of the Corps of Engineers. Following his survey of the man-made elements, he reported to Congress on the condition of the waterway. Concerning the features in Appleton, he indicated that they generally were in poor condition, noting that the upper dam required new gravel each season to keep it tight. Of the locks, he observed all in need of remedial attention that included replanking beneath the water line and found Lock 2 in the worst condition, with its south wall threatening to collapse.
Posted by Cornerstone Preservation at 11:54 AM